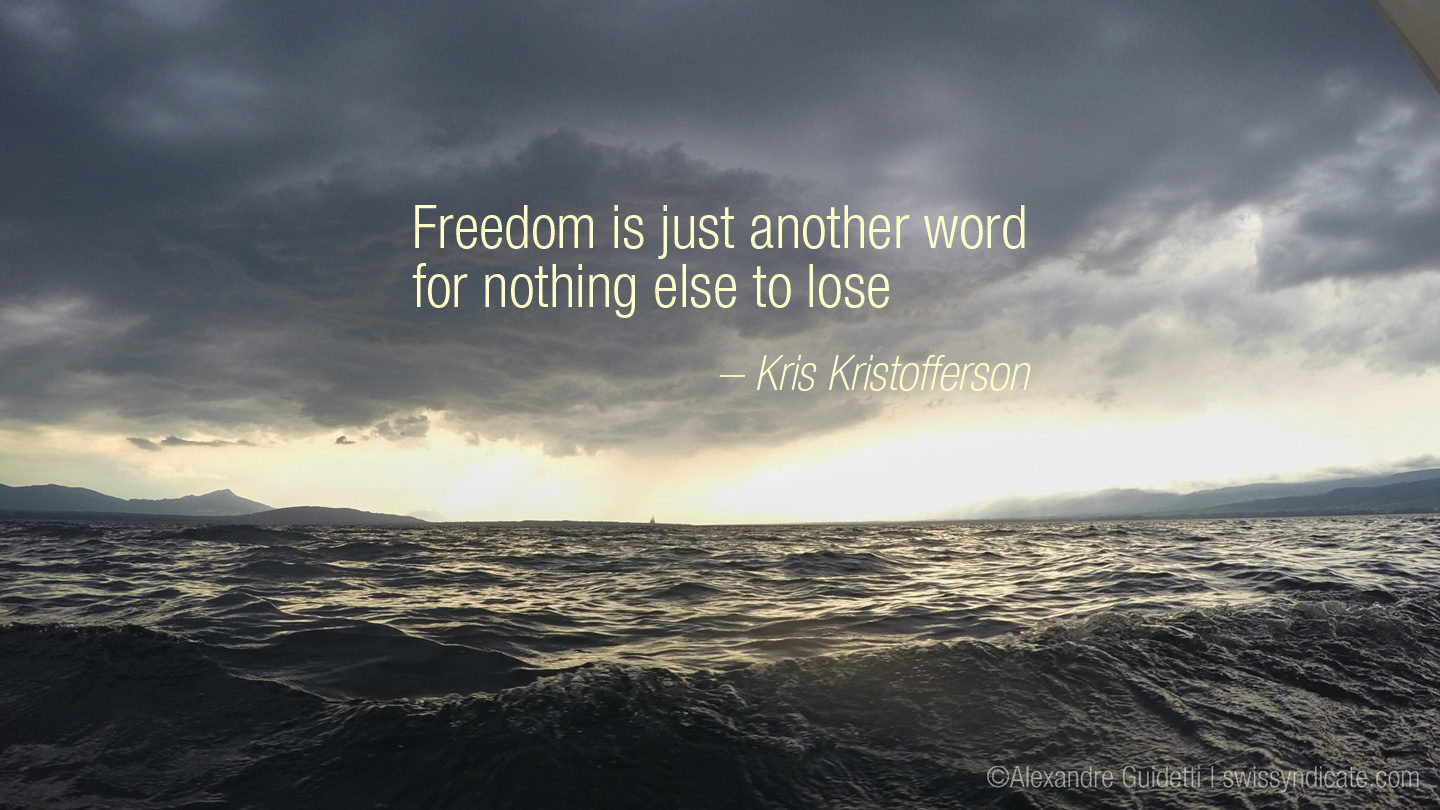 In rational terms, freedom is harder to fully attain. I can be free with my thoughts and beliefs even chained and locked away in a prison cell, office cubicle or wretched job. I can be brainwashed to be content, yes. Believe that I’m happy doing the right thing. But what if I take the controls away from others who remotely control my life? I’m not in a prison cell, so I can walk away. The door seems to be locked, but if I push, it will open. What’s beyond it is said to be no-mans-land. Dangerous and frightening. Unknown. to quote the classic line “There is nothing to fear than fear itself”. There are so many doors closed before us. The job and career door. The relationship door. The home door. The health door. The security door. The society door. The bank door. What is beyond those doors? Freedom!

I’ve made my way through some of these doors, and what I found beyond is not as scary as I’d been led to believe. And as I walked through them, the shackles and chains I was bound to gave way. I felt a lightness of being. A sense of responsibility for myself and less to others. Servitude to my own needs and not to others. I was no longer bossed around by anyone but was my own boss. No one can tell me to smoke less, drink this, work more or go there. But I can. If anyone is going to boss me around, it will be me. “Stop smoking you idiot!” I can berate and dictate. Me to me! Is this freedom? To me it’s the closest thing to it.

But back to the practical terms of freedom and the question “Why live on a boat?” The human animal is a nomadic creature. We have been moving around the continents since we were mobile. Wether to look for food, land, water or mates. We have moved around so much that most of the land is inhabited. And we have moved across lakes and oceans. Yes we have settled, but even so, there are Japanese in Brazil. Italians in Argentina. Spaniards in South America. Turks in Germany and just about every nationality in Switzerland. We love to move and seek out new places. Generally, it’s to find greener pastures. Meaning that life sucks where you are and there’s got to be a better place out there.

My neighbor Daniel once asked me a catalytic question. “Alex,” he said, “If you had a million dollars to spend on a house, and only a house. Where in the world would you buy or build that house?” My obvious answer was Mexico, as it was where my wife at the time had moved. She’d left me, but refusing to accept separation, I visited her on many occasions, I had really appreciated Mexico and fell in love with her again there as well as her lifestyle – that’s another story. But where in Mexico? The country is huge and offers everything from beaches, to mountains. Cities and villages. Jungles to deserts. When I thought about it, I could not decide. I would have to travel the country to find just the right place, or Le Coup de Coeur. But then I thought there were other magnificent places I could have my house. Columbia, Ecuador, Thailand, Spain, Italy, India! Fucking hell, I could not answer Daniel’s question.

A boat. It dawned on me. Yes! A boat. That can be my million dollar house, and I can have the freedom to live just about anywhere I want, as long as it is by the ocean. A million dollars would buy me a boat of considerable proportions, so I could probably do with a tenth of that. The thing is with a boat is that it’s a house and it’s mobile. Motor or sail was of no debate in my mind, as I’ve always enjoyed sailing and have owned a few. I must give credit to my dear friend and neighbor Daniel – – who’s moved back to England – for the enlightening cataclysm.

So the idea of finding freedom, or being free seemed as simple as getting on a sailboat and fucking-off to travel the world. The concept is simple, but to release the shackles that bind you to land, or as it is said in sailing terms “Untying the Lines” is a little more complex. The hardest chain to break was in my mind. My deep beliefs were nourished by fear. Fear of the unknown.