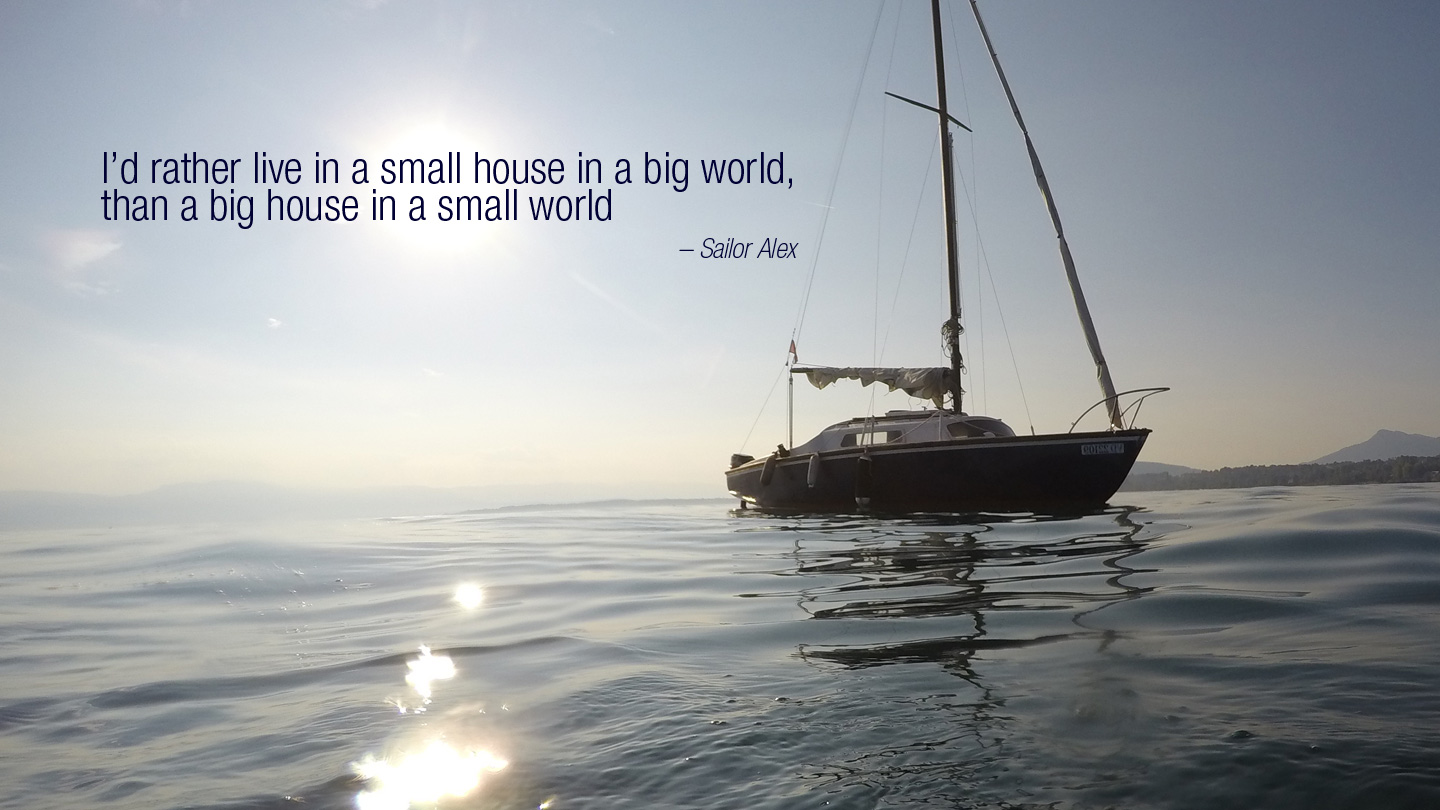 Why Live On A Boat?

People have been asking me “Why?”. To different degrees, some perplexed, others curious or envious, or even afraid. Why would you want to leave a comfortable lifestyle in one of the most beautiful, safe and rich countries in the world? A country and lifestyle envied by most. A utopia sought after by millions. A haven of peace and tranquility pictured as paradise on the covers of religious brochures. Why live on a boat? Why? WHY!?

Freedom. That is the simplest answer. We are slaves, with all due respect to the historic concept of slavery, we are slaves. Slaves of modern society. The shackles and chains are not of iron, but of commitment. We are psychologically, morally, figuratively locked in a system for life. We have been brainwashed and convinced by teachers, preachers, brothers and sisters. By friends and neighbors, bosses and bankers, insurance vendors and lottery winners to follow and serve blindly the guiding light of the almighty. Money.

We are tied to ideas, chained to beliefs, nailed by debt, committed to relationships, tortured by bills, forced to compete, pushed to win, taught to follow, obliged to work, told to believe. Can anyone be told to believe? Does anyone have the right to make you believe? Are we not clever enough to have beliefs that are entirely self generated? The horrid slave traders used fear to force their beliefs with hideous means and murderous threats. Today, brutal slavery has been replaced with psychological servitude. We still must work until our dying day under the power of fear. Fear of failure. Fear or gossip. Fear of others. Fear of loss. Fear of pain. Fear of death.

Let’s face it, we are all going to die. This is the one truth and certainty we can believe. Because it’s going to happen no matter what. Some say there is life after death. Is there? Or is it something you’ve been convince to believe? If we come to terms with the fact that we will die and that’s all there is to it, we have to accept it. Just like we have to accept that the day comes to an end. We then can take advantage of that day as we please until it’s time to pack up the beer cooler, fold up the beach towels and eventually go to sleep as the day comes to an end.

My day is nearing the end in terms of a lifetime. I have a few hours of sunshine left, a few beers in the cooler. The kids are doing their thing on the beach and the wife is reading her book. I have just a few hours to myself to sit and ponder. Walk the length of the beach. Swim and catch a few more waves or cast a line for another fillet. Soon enough I’ll have to pack my gear and turn in. My life will end just as all the days I have so far survived and accept the call of my tired soul to sleep one final time. What happens after that, I care not to know, as I will never know until it happens. What I do know, is today I am alive and have a few more bonus years to play with. So I might as well live on a boat and discover the world.

Philosophically, that is my answer to “Why live on a boat?”