Sebastien had some free time in his busy schedule of being a Dad, an event organiser and musician. It was summer time in Switzerland and that’s where he was. Sailing never really was his thing, as I had tried to get him to come sailing with me on lake Geneva. The few times he came he was either bored, unimpressed and reeling to get back to shore. But this time it was sailing in the ocean. Father and son sail The Canaries.

The journey from Lanzarote to Tenerife

He’d never been in the Canary Islands, or had sailed on the ocean. And this was the Mid-Atlantic Ocean. Something he’d really never could have imagined in his wildest dreams. I’d planned to ease him into the ocean sailing, but he was eager to get into it with enthusiasm. That lasted a few hours until he became seasick. We were heading upwind, into waves for the next eight or so hours to get to the island of La Graciosa. He was happy to stroll the golden beaches. Just simply to be on solid ground. But we had other islands to sail to. 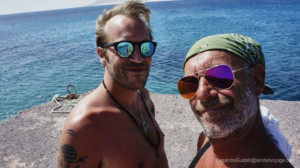 Me and Seb at Isla Los Lobos

He was only aboard for a couple of weeks. So we sailed down to Los Lobos island. Along the Western coast of Lanzarote island. It was a beautiful downwind sail and we anchored at the end of the day. In the morning we visited the island and then sailed down the east coast of Fuerteventura island to the marina at Gran Tarajal. A welcome relief from swaying all night long at anchor the night before. After a couple of days in the little village we continued on to the very tip of Fuerteventura and found a mooring at Mojo Rable. There we explore a long deserted beach away from all the German tourist. 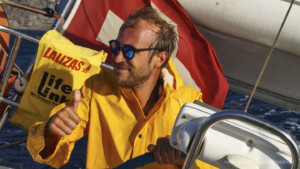 Then we sailed across from Fuerteventura to Gran Canaria at night. A first for Seb to do an overnight sail. An integral part of what father and son sail The Canaries is about. In the morning we moored at a busy tourist marina called Puerto Mogan. We met a friend of Seb’s who invited us to dinner and brought us to one of the Canaries busiestÂ beaches. We were happy to get back out to sea just the two of us. Next passage would be from Gran Canaria to Tenerife island. Another overnight sail across one of the reputed acceleration zones.

I was not too worried as I had check the weather report. But wind forecasts around the islands can be misleading. And you can quickly be surprised by powerful wind gust coming around the mountainous island at great speed. With two reef in the main and the genoa sails, I had too much sail. Galopin was forcefully laid on it side, water pouring into the cockpits and waves raging all around us. It was the first time Sebastien said “Dad, I’m really scared!” So I did what all conscious sailors would do, took in a third reef and furled more genoa. Glopin stabilised and we pounded our way into the wind tacking back and forth close to the coast to stay clear of bigger waves until we could cut a straight line to Santa Cruz de Tenerife. 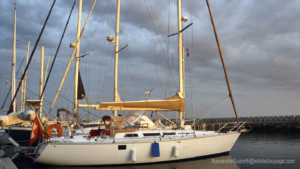 It a bit of a harrowing passage, but we managed. Mainly because I learned to manage Galopin. He is truly a wonderful vessel. The only downside is that Seb was seasick again and since it can be contagious, I threw up for the first time as an ocean sailor. It was brief and I managed to be on watch most of the night until Seb relieved me in the early morning hours. And that’s how Father and son sail The Canaries.